About Life, Faith, Cardinals, and Whatever
Leave a comment

Matheny Era is Alive and Well

If there is any doubt that the St. Louis Cardinals have moved on from Tony LaRussa to a new style with Mike Matheny, today’s move of DFAing J.C. Romero and calling up Eduardo ‘Nasty’ Sanchez proves it.  Fresh off of a weekend that included honoring LaRussa by retiring his number, being swept by the Atlanta Braves, and giving away tons of goodies at Busch Stadium, the Cardinals continue to make moves.

Matheny is fully in the process of giving his players rest as he works to give as many At-Bats for the MVP of this team so far, Carlos Beltran, and rising stars Allen Craig and Jon Jay, as he does the regular All Stars Matt Holliday and Lance Berkman.  Some say this is a good problem to have (which it can be) if the stars are aligned when you sit the right player and the others perform.  I just think that there is another move to come for the Cardinals.  Something tells me that Tyler Greene will be traded for a lefty out of the pen of some other team that needs infield depth and has a reliever that could use a change of scenery and coaches.  I also think this depends on whether the Cardinals try to see if Allen Craig can play 2B.  Will Jose Oquendo take extra time to see if he can actually handle the position?  The Braves and Dan Uggla show that the glove will develop if the bat is there.  We shall see. To me, this would be only a short term solution.  Do you look at trading Jon Jay while he is peaking to make room for Craig in right field if Beltran shows he can play CF every day?  I doubt it.  But this is part of what makes baseball so much fun.  Fans can be the General Manager in their own heads.

There is no doubt that the performances at the plate of Beltran and Jay have exceeded everyone’s expectations.  Add in Lance Lynn being 6-1 in place of injured Chris Carpenter, Jake Westbrook and Kyle Lohse performing at above average standards, and a defense that is the best in the National League with a .988 fielding percentage and you should be happy the Cardinals are in first place.  The Cardinals lead the NL in Batting Average at .283, home runs at 46, RBIs at 181, hits at 340, triples at 13, On Base Percentage at .355, slugging at .468, walk allowed at 86, and are in the top 5 in many other categories.

Matheny has led this team.  Along with pitching coach Derek Lilliquist, bench coach Mike Aldrete, and hitting coach Mark McGwire being more free, this team is blossoming.  Of course there will be bumps in the road.  Of course we will not win every game, and players will struggle because they are human.  Whether you’re a 13 year old kid or a 30 year old professional, you will make mistakes.  It happens.  Don’t let this stuff get you down and continue to root root root for the Cardinals. 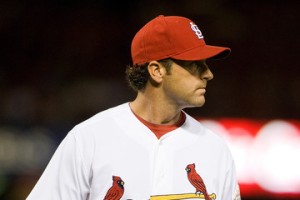