Inside My Cardinals Hall of Fame

My June project for the United Cardinal Bloggers is to talk about what I would want to put in the Cardinals Hall of Fame. You see, with the someday opening of Ballpark Village outside Busch Stadium, they are planning on installing a Cardinals Hall of Fame there. I am kind of excited for this. I am curious to see what they put in there. I am not going to state the obvious in what should be in there, so I will go with a bit more obscure, but hopefully not too much for a good Cardinals fan. 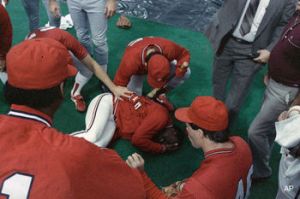 What happens after a tarp hits Vince Coleman

First thing I thought of was the tarp from 1985. Please tell me I don’t have to explain this to you. But for those of you who don’t remember, Vince Coleman got caught in the tarp and hurt his ankle before the fourth game of the National League Championship Series and was not available to play for the rest of the playoffs. The Cardinals would have probably had a World Series Championship that year if he had played.

The next items I thought about revolve around one of my favorite Cardinals, Lou Brock. Where would my childhood be without Broccapop or Brockabrella? I used to drink a Broccapop every chance I could get as a kid. Vess soda was the rage at Grandma’s house. I wish they still made it. Was there a better red cream soda? The Brockabrella was an umbrella hat. It was genius. Plain marketing genius. 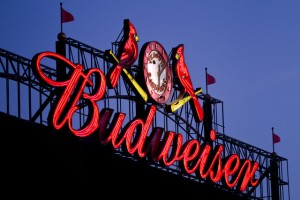 I would also like to see some sort of Anheuser-Busch tribute area. The company owned the team from 1953 to 1996. The stadium is Busch Stadium III. The family and company did a lot for baseball in the Midwest. Busch Memorial Stadium (Busch II) was paid for and built by the brewery and lasted from 1966-2005. I would like to see a Budweiser can and beer stein tribute area to go along with this. Just think of how many AB products have had a Cardinals logo on them at some point.

I could go on and on about the things I would want in the hall of fame, but I think the Cardinals will cover most of them. Tried to think a little outside the box here and what I think of when I think St. Louis Cardinals baseball.

One comment on “Inside My Cardinals Hall of Fame”