Sometimes I find it hard to realize how amazing of a son I have. I am the type to remind him that he can always be better. Sometimes I know he doesn’t like me but I know for damn sure that he loves me and I love him.

Going into this school baseball season Josh expected to make the Junior Varsity team. He is on the same summer team as a bunch of them, so it made some sense. He did not. I don’t want to speculate why he didn’t but God had a plan. Josh played Freshman Baseball for his Pattonville Pirates. Josh was named the team Captain at the start of the season. He never told us that he got picked to be Captain, another teammate did. That’s just how he is. No bragging, but doing the best he can with the situation God has put him in. 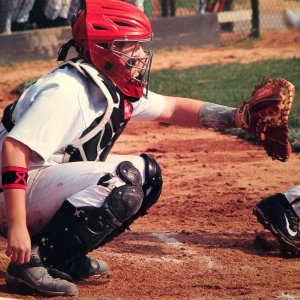 The Freshman Pirates just finished their regular season with a perfect 12-0 record. Josh either pitched or caught in 10 of those games while the other time was at 1B and 3B. His pitching numbers were 4-0 with 2 saves. I didn’t track all his pitching stats but I know his last start he went 6 2/3 inningswith 8 strikeouts while pitching shutout ball against a very tough Westminster team. Batting wise he had a .535 batting average with 17 RBIS, 15 runs and an on base percentage of .675. That means when Josh batted (mostly third in the lineup) he was on base over 2/3 of the times he came up. That stat just amazes me. He was a team leader on and off the field. I also thank some good coaches he had to let him lead.

Oh yeah, in school Josh survived Freshman year taking all core honors classes and one was a Gifted Honors English class he thought was going to get to him. This week, Josh has been invited to school for Freshman awards night. He does not know why and is not looking forward to dressing up.

Some of you know that Josh wants to be a teacher when he is done. Right now he says middle school math teacher and help coach baseball. I know that my son will accomplish whatever he decides to. For fall he has decided he has had enough of football. He may give soccer another try but I think he is leaning towards helping the girl’s softball program at the school by being a team manager.