If I Could Go Back to Any Game

The January United Cardinal Blogger project is a fun one. If I had a ticket and a time machine which game in Cardinal past would I attend? I went to the last regular season game at old Busch Stadium and the first at the new Busch. I got to experience the final game of the 2004 World Series. I saw Albert Pujols’ first game at Busch and Mark McGwire’s last. In my heart I had two choices left; to see Lou Brock’s last game or Game 7 of the 1982 World Series. I chose the World Series game because I actually remember that one.

In 1981 in a divided strike altered season, the St. Louis Cardinals had the best overall record. They did not make the playoffs due to the split standings that decided that year. There was lots of excitement going into the 1982 season. At one point in the offseason of 1980 the Cardinals had both stud closers Bruce Sutter and Rollie Fingers on their roster. Fate had it that Fingers would get sent to the Milwaukee Brewers along with Pete Vuckovich and Ted Simmons. The Cardinals would meet them again in the 1982 World Series. Fingers did not get to pitch in the World Series due to an injury.

I was a young boy. I listened to Cardinals games in the backyard with my Grandpa. We watched the Saturday Game of the Week on NBC. I think I got to go to one game all season in person. But the playoffs were all on TV. The World Series featured then young local St. Louis native Bob Costas doing in game reporting for the first time. This is TV back when there were only 6 channels to watch at the most. Willie McGee was leading the Cardinals as a rookie with his homeruns and jumping catches. I remember staying up through the rain delayed game 6 and John Stuper’s magnificent performance leading into game 7. He pitched a complete game despite over 2 ½ hours of rain delays. My mom let me stay up and watch every World Series game. I was 12 and in 6th grade.

Game 7 was a rematch between Joaquin Andujar and Pete Vuckovich. Andujar pitched seven strong innings and Bruce Sutter finished the rest of the game then ended in the arms of World Series MVP Darrell Porter. It was a great game with the silent leader George Hendrick giving the Cardinals the lead in the bottom of the 6th and they never looked back winning the game 6-3. 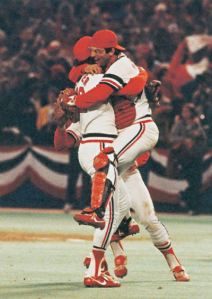 Why that game? The Cardinals were underdogs. The Brewers were the mighty powerful Harvey Wallbangers with their 216 homeruns while the Cardinals only had 67. Whiteyball was the Cardinals mantra. That was solid pitching, great team defense, aggressive base running, and all around manufacturing runs. This was a Midwestern city battle World Series. They referred to the series as the Suds Series since both towns were huge beer producers. The Cardinals swept America’s team, the Atlanta Braves to get to the Series. I wanted to be there in person to see the marquis on the scoreboard that made me cry as a boy. It simply said ‘WE WIN’. 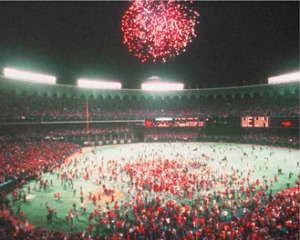 One comment on “If I Could Go Back to Any Game”